Delivering a 100% connected model in practice

Qnect, based in Hadley, MA, has been helping GC’s, Structural Engineers, Steel Detailers and Fabricators slash costs, prevent schedule drift, and reduce time to fabricate on a range of projects from hotels to office towers to airport expansions and more for over five years.

“With a landmark project like Fenway Center, expectations are high,” says Blanchet “we needed to combine engineering talent with proven tools that would help us meet the demands of the project. Qnect provides a necessary solution that creates value at every turn.”

“Once we received the model and the structural drawings we were able to load it on our system and produce results that same day,” says Qnect Co-Founder, Henry Lederman.

How did Qnect do this and what were the results?

Using Tekla Structures as the platform to the model, Qnect sends the relevant model data to the cloud, processes it and then sends it back down to the 3D model, fully engineered and detailed for steel connections.

In reviewing the data provided by Qnect’s analytics, over 400 beams were discovered that needed web reinforcing due to coping. The team was able to get the list of the ID's back to the EOR who upsized many of the beams to eliminate the doublers.  Even with the 5 round trips from the EOR software to Tekla to Qnect and back, there was no additional charge for this workflow. 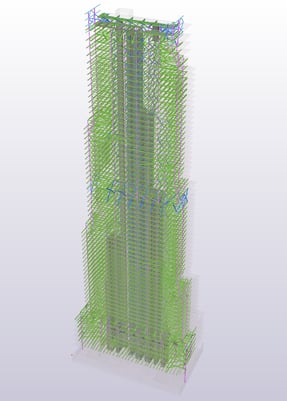 Breaking down the design process

How is this possible? The EOR (Engineer of Record) hired Qnect who used the EOR’s design software (Tekla Structural Designer) during the design development phase. Qnect converted the delivered EOR model into a Tekla 3D model and transferred the loads. Qnect then ran the building using Qnect software.

Qnect engineered and placed the loads back in the model for most of the connections. Then, using the Qnect analytics process, new data insights were realized and decisions were made to  save tens of thousands of dollars.

In this one case, 414 beams were found that needed to be reinforced due to the flange copes. Fabricators will tell you, reinforcing is extraordinarily expensive in the shop and the shop often never knows about it until it's too late. The cost for this project could easily be between $120,000 and $160,000.

Because Qnect is so fast and can do so much so early, and in this case during design development, a building can be engineered and detailed a hundred times and long before it's gone to bid. The information is then used to improve the design and speed the project. With an improved design and speed, the EOR’s reputation increases and the relationship with the owner is strengthened.

Qnect returned the file and identified doubler locations, so the EOR could easily consider changes. The engineer then upsized a large number of those beams and returned the file. Qnect converted back into Tekla, brought the loads in, and ran it again. This was pretty seamless. There was no manual transfer which is revolutionary in terms of steel delivery.

In the second round, about 160 doublers were still needed. Qnect changed the configuration for the ends to an extended shear plate which automatically eliminates copes. Qnect then re-connected those in minutes and reduced the number of reinforcing doublers to 40.

Wow, from 414 to 40!  Now the EOR received the file and observed that the 40 that were left had more to do with a framing condition and decided to rotate the framing parallel to the truss chord rather than perpendicular, ultimately eliminating all 40 of the remaining doublers.

So before this “expense” went to the shop and before it even got to the bidding stage, Qnect worked with the EOR to create value.

Jef Sharp, Qnect’s CEO explains, “We didn't improve the design process by involving a whole bunch of people. It was kept contained within the EOR relationship to Qnect who carried the contract for the connection engineering and detailing.”

The ability during design development to connect the entire building is impossible with any other workflow in our industry. Qnect’s software is the engine and the infrastructure to make delivering fully connected models a reality.

Budget & MEP Early Coordination Model: what it is and what it does

A budget & MEP early coordination model can be created by Qnect early for smarter bidding.

Fenway Center’s lateral bracing system was made up of HSS bracing and W14s. The Qnect software engineered all of the gussets for the HSS bracing. Qnect needed to deliver to the owner a 3D model with gussets placed, so that the MEP coordination could be done during the earliest phases of the design development

Qnect ran its software on the building, putting the gussets in the model. For the gussets not included, the team extracted the loading in three ways:

Qnect’s engineer then designed those gussets and a Qnect detailer placed them in the model. Now the early deliverable includes 100% of the gussets.

Lederman shares, “the consequence of that, if you can think about it, for a minimal amount of cost relative to the total cost of detailing the project, is that the general contractor and the owner now have a model even before it's gone to bid to do some smart and intelligent BIM coordination with the other trades in particular with MEP.”

Fenway has been in the making for years and construction will continue. Qnect’s role in the success of the project and delivering results on time not only reduces schedule drift but also provides confidence to the rest of the team that the steel portion will be complete as planned with digital optimization that others on the project will benefit from.

Send us an email or set up a meeting.